schoggi 282 Posts
July 2019 edited July 2019 in Announcements
Konzeptlos Basel presents:
ROB (Ghana) live
at Kaschemme Basel, Switzerland
The infamous „Konzeptlos presents“ concert series at Kaschemme is celebrating its 5th anniversary with none other than legendary ROB! The 70 years old singer Rob «Roy» Reindorf with his distinctive deep vocal style is something of an enigma in the Ghanian music scene. Back in the golden days ROB wasn’t a superstar like Ebo Taylor or Pat Thomas, both are still touring and have played at Kaschemme. ROB admired the western music of James Brown and Otis Redding etc. and moved to Benin to learn the piano at a music school in Cotonou. He was playing with some of the most famous bands on the scene like Black Santiago or Orchestre Poly-Rythmo. After he learned to compose music, ROB returned to Ghana to write his own compositions. In 1977 he travelled to Takoradi, teamed up with the band «Mag-2» and recorded a powerfull, tight and hard-driving Afro-Funk sound unlike everything else heard on the scene. Essiebons label owner Dick-Essilfie-Bonzie signed him purely on the strenght of his wild live performances. Both, «Funky Rob Way» and «Make It Fast, Make It Slow» belong to the best and most sought after Funk albums on the planet. In 2019 three labels (Soundway Records, Analog Africa, Mr. Bongo) re-released his musical treasures from the 70s. ROB is on a European tour for the first time ever. An All-Star band of musicians from the surroundings of Ebo Taylor and The Poets Of Rhythm is backing him up. Another unforgettable Sunday evening at Kaschemme is all set-up. It's the 23rd edition in the concert series run by the Konzeptlos DJ collective D.H. & Rainer and of course they’re playing some dusty plates before and after.
ROB - vocals
JJ Whitefield – guitar
Eric Owusu - percussion
Andreas Kainz - keyboards
Tomi Simatupang - bass
Bernd Oezsevim – drums
Event: https://www.facebook.com/events/888010254893478/
Listen to ROBs music and support the artist and the labels:
https://soundwayrecords.com/buy/make-it-fast-make-it-slow/
https://analogafrica.bandcamp.com/album/funky-rob-way-2
http://www.konzeptlos.org / konzeptlos presents series
http://www.kaschemme.ch 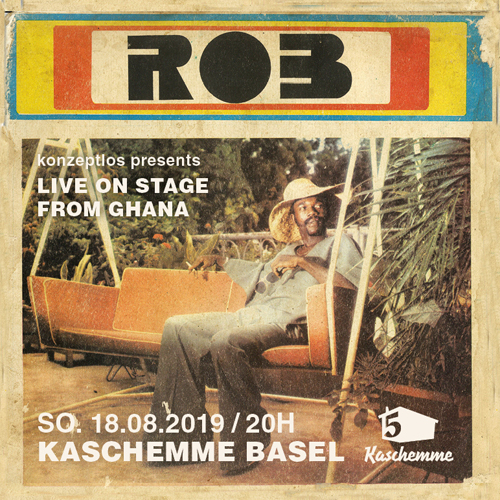 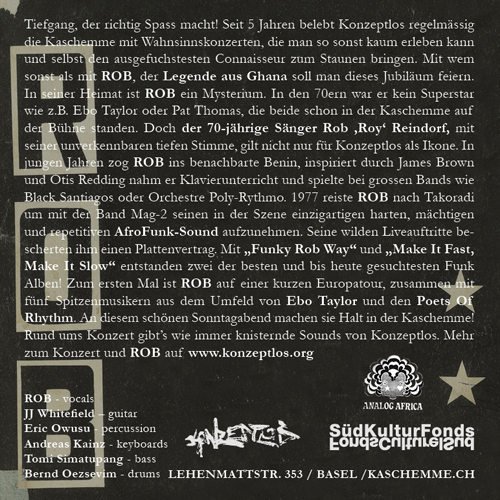 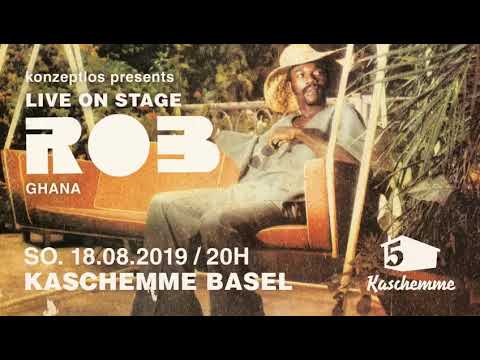